In this video  from Rigid  you get a quick introduction to their range of hydraulic pipe bending machines. Linmar Pipework Services have our own purpose bending machine at our facility in Sheffield where we can pipe bend up to 12 inches in any material, including stainless steel tubing and to any wall thickness. However where pipe bends are smaller and particularly so when on site these machines are ideally suited to the work.

Beginning with the range the basic manual hydraulic bender, there is a 3/8 – 2-inch unit, comes in the configuration shown in the video. Its referred to as a tip up wing. The wing head is actually hinged, and you insert the pipe bend, and then open the wing to remove the bend afterwards. Standard kit that comes with all the hydraulic benders are the forms. They start from 3/8 of an inch, and for a 2-inch bender as in the video, they are 3/8ths, 1/2-inch, 3/4-inch, 1-inch, 1 1/4-inch, 1 1/2-inch and 2-inch. Last is a straightening former, used for straightening out necks in the pipe. There are two styles of wing heads available. One, has an open wing, as opposed to the tip-up wing. It’s just a personal choice depending on individual preference they both do the same job. With the open wing you will get better access in and out to the actual bending formers, and it’s quicker and easier to take the pipe out.

But some people prefer tip-up wing. It’s just preference. Recently for transporting storage, Rigid have added another feature to the bender, which is just a simple pushpin, which fits in the back. It locks the handle down so you can put the unit up and transport it around. Going up through the range, there is a 3-inch bender, slightly larger to give more bending force, and it has a bigger wing head. Its a tip-up wing style, and will cover pipe sizes from 3/8 – 3-inch. A worthwhile addition which will save time and energy, is an optional electric motor. The video shows a 2-inch open wing setup, this time with an electric operated pump.

Finally two accessories are available for all the models, one of which is a tripod stand, and a set of custom wheels. 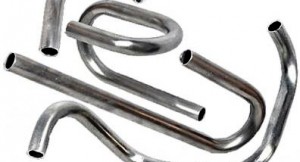 Linmar have been in the pipe bending industry for over fifty years and offer pipe bending and pipe coiling services to not only local companies around Sheffield and Yorkshire but  throughout the United Kingdom. For all your steel tubing and pipe bending needs please contact us and allow us to give you our most competitive quotation. 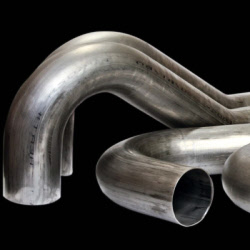 Custom Pipe Bending in any material to 12 inch diameter and in any wall thickness, we have been bending pipe since the early 1960's so feel we are ideally placed to provide you with a first class service